How finance and sustainability go hand in hand

Thanks to our financial position, we are able to continue to invest in our networks and grow the business. This enables us to pursue our strategy and play a facilitating role in the energy transition. Our financial policy is designed to allow us to maintain a solid A rating. There is evidence that sustainability considerations are an important part of the deliberations of shareholders and other investors alongside sound financial policy. Alliander supports the significance of sustainability and so the company’s sustainability targets play a prominent role in the management of the business and external financing. Our efforts are being rewarded, as shown by the B+ sustainability classification awarded by the rating agency, Oekom, which is the highest rating of all the companies operating in the network sector rated by Oekom, including European, American and Asian companies.

Alliander’ s financial framework is formed by the FFO/net debt, interest cover, net debt/net debt plus equity and solvency ratios. These ratios, coupled with the norms against which they are measured, are crucial in obtaining and retaining a solid A rating profile on a standalone basis. In a departure from IFRS, when calculating the ratios, the subordinated perpetual bond loan is treated as 50% equity and 50% debt.

As at 31 December 2018, the FFO/net debt ratio amounted to 32.2% (year-end 2017: 27.4%) compared with a required minimum of 20%. The increase is mainly accounted for by a relatively greater increase in operating profit compared with net debt.

As at 31 December 2018, the interest cover ratio worked out at 12.9 (year-end 2017: 10.2). The increase is mainly accounted for by lower interest expense and an increase in the operating profit. Alliander’s financial policy stipulates that this ratio should be a minimum of 3.5.

The dividend policy (as part of the financial policy) provides for distributions of up to 45% of the profit after tax, adjusted for non-cash incidental items, unless the investments required by regulators or financial criteria demand a higher profit retention percentage and unless the solvency ratio falls below 30% after payment of dividend.

The investment policy is consistent with the financial policy and is part of Alliander’s strategy. Elements of investment policy include compliance with regulatory requirements relating to investments in the regulated domain, such as safety and reliability, and the generation of an adequate return on investment. Ordinary investment proposals are tested against minimum return requirements and criteria as set out in the financial policy. Innovative schemes require specific Management Board approval. As well as quantitative standards, investment proposals must also satisfy qualitative requirements. It should also be noted that, in principle, investments in the regulated domain arise from a network operator’s statutory duties.

Alliander makes a major contribution to the prosperity of the Netherlands, indirectly through the considerable impact which the distribution of energy has for the Dutch economy and for the quality of life experienced through the permanent availability of energy. This is further explained in our impact model, Our impact and value creation section. We have a direct impact through the value of income for our stakeholders and through earnings, salaries and fees, donations and other investment in society. This is set out in note 24 of the Financial Statements. The dividend distributed to shareholders and payments to providers of capital and government authorities make an indirect contribution to social goals. The way these items are allocated and used is set out below.

Alliander pursues an active policy of maintaining an open and constructive dialogue with shareholders, bondholders, financial institutions, credit rating agencies, sustainability rating agencies, analysts and the media. We try to provide all stakeholders with timely and accurate relevant information on finances, strategy, risks, sustainability and other matters, in reports, in press releases and in meetings as well as by other means.

Institutional investors in our bond issues, such as asset managers, insurance companies, pension funds and banks, provide a large part of our financing in the form of debt. These are mostly Europe-based professional players on the international financial markets. We keep existing and potential bondholders informed regarding the company’s financial position and results as well as developments in the industry by actively engaging in investor relations activities in addition to complying with ordinary publication requirements. In this context, in April 2018 we met investors in Amsterdam, Frankfurt, Paris and London to discuss the 2017 figures. In September 2018, we held a conference call on the half-year figures. Various matters were covered on both occasions, including the sale of Allego, the major campaign to install smart meters and the impacts that the phasing-out of gas and the growing numbers of electric vehicles will have on Alliander.

Issue and repurchase of perpetual bonds

On 29 January 2018, Alliander announced the intention to issue a new subordinated perpetual bond loan. At the same time, an offer was made for all the outstanding bonds of the €500 million perpetual bond loan issued in 2013, conditional upon the successful issue of the new loan. Subsequently, on 30 January, €500 million in new subordinated perpetual bonds was successfully issued at a coupon rate of 1.625% and an issue price of 99.144%. By the offer closing date of 5 February, applications were found to have been received from investors for repurchase by Alliander of bonds totalling approximately €413 million from the 2013 issue. The remaining amount of approximately €87 million in bonds that are still outstanding is redeemed under the terms of the loan on 27 November 2018 at 100% of the nominal value by exercising the first right of redemption. In line with Alliander’s financial policy, the new bond loan will be treated as 50% equity in the financial ratios. The current recognition as equity will be continued under IFRS.

The repayment schedule for the interest-bearing debt as at year-end 2017 and 2018 was as follows:

The amounts scheduled for repayment in 2019, 2022, 2024 and 2026 mainly relate to bond loans. The other amounts relate to the repayment of shareholder loans and other loans. Alliander has a €3 billion EMTN programme. As at 31 December 2018, the carrying amount of the outstanding bonds was €1,395 million (nominal value €1,400 million). Alliander has available an ECP programme totalling €1,500 million which can be used to issue short-term debt instruments. Alliander issued ECP loans at various times during the year but there were no ECP loans outstanding as at year-end 2018.

In July 2018, Alliander renewed its existing committed €600 million back-up credit facility for one year. The facility now runs to July 2023. The facility has been entered into with six banks. As in previous years, this facility was not drawn on during the year.

In June and November 2018, the final two tranches of the loan from the European Investment Bank, amounting to €100 million and €125 million, respectively, were drawn down. This loan, totalling €300 million drawn in three tranches, was contracted in July 2017. The first tranche of €75 million was borrowed in September 2017. The loan becomes repayable in full in 2031.

In order to retain ready access to the capital and money markets, it is important for existing and potential financiers to have an accurate picture of Alliander’s creditworthiness. Alliander uses credit ratings for this. Having a credit rating is also an obligation under the terms of the cross-border lease contracts entered into at the end of the 1990s by Alliander’s legal predecessors. Alliander has credit ratings from S&P and Moody’ s. These ratings comprise a long-term rating with an outlook, and a short-term rating. The outlook is an indication of the expected change in the long-term rating over the next few years. S&P and Moody’ s have kept both ratings and outlook unchanged. The credit ratings as at year-end 2018 were as follows:

During the reporting period, Alliander was in contact with the rating agencies on several occasions. Discussions included the sale of Allego, the shortage of technical staff, cost savings and the challenges of the climate change targets and the energy transition. Based on the recent financial performance and forecast figures for Alliander presented on these occasions, S&P and Moody’s reassessed Alliander’s creditworthiness and confirmed the existing ratings and outlook.

The Management Board has determined, with the approval of the Supervisory Board, to add €184.1 million of the profit to the other reserves. The remaining profit of €150 million is at the disposal of the General Meeting of Shareholders. This equates to 45% of profit after taxation, excluding incidental items after tax that did not generate cash flows in the 2018 financial year.

The dividend for 2018 is up by €58 million compared with 2017 owing to the higher net profit for 2018, which is mainly explained by the fact that there was an incidental book profit on the sale of Allego in 2018. 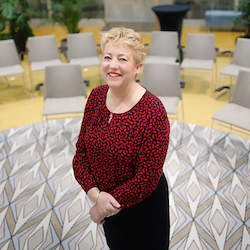 The Board of Mayor and Alderman of the Municipality of Zevenaar (one of Alliander’s shareholders) set forth an ambitious energy policy in their council programme. The municipal organisation aims to be climate-neutral by 2025, with the goal of achieving the same thing for the entire municipality by 2040. ‘This is not about compulsion,’ says Carla Koers, who has responsibility for Environment and Sustainability on the council, ‘this is about people doing their own thing.’

The council has already done quite a lot. The town hall and other council buildings have solar panels on their roofs and much of the council’s vehicle fleet is electric. ‘Fairly basic stuff,’ admits Koers, ‘but we are now taking the next step in reducing our carbon footprint. We are looking at our remaining diesel-engined vehicles, encouraging waste separation and formulating our vision for heating. We are canvassing local people for ideas and actions for making the various parts of the town gas-free and more energy efficient. We are starting a trial in two districts next year and also embarking on power generation from renewables in a big way.’ Koers observes that this is very much a hot topic in the town. ‘The people of Zevenaar believe that it really is now time for a change. Businesses are putting their heads together and people themselves are coming up with ideas for a future without gas.’ She laughs: ‘People are getting really energised about it.’ Koers has agreed with the council that nothing will be compulsory. ‘We are consulting with the people who live here and giving them a blank sheet for them to decide which way they want to go. The local authority is merely creating the frameworks.’

Koers wants to start drawing up plans for the heating vision as soon as possible. And any help that Alliander can give will be very much appreciated. ‘We want to identify right from the outset where the problems are, who performs what role and how we can help each other. Energy storage is a major stumbling block in the transition, but capacity is also a big problem – both network capacity and the availability of technical staff. In the masterclass organised by Alliander for municipal authorities, we saw how big those problems are. So it is great to be able to talk about them with each other – and with other municipal authorities. We really need each other. Let’s find the right solutions together.’